For part two of my Summer of Shropshire, I'd like to take you all on a trip to Viriconium Cornoviorum, or Wroxeter Roman City. 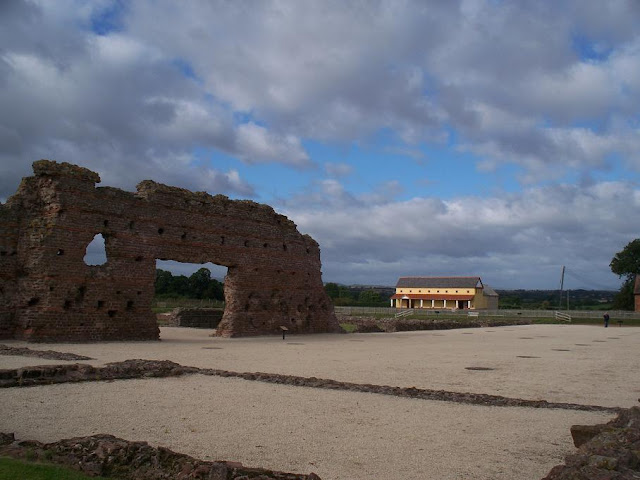 Viriconium was founded in the 40s, during the invasion conducted under Emperor Claudius as little more than a marching camp. A fort developed here for the 14th Legion to stage from when they were poised to invade Wales. As happened a lot with Roman forts, a civilian settlement grew up outside the main fort complex, called a 'vicus', where the wives of Roman soldiers lived with their families. What we have on show today that has been excavated is just the main city baths, which means the site name of "Roman City" is something of a misnomer in my eyes. But what has been excavated is nonetheless impressive, so let's continue! 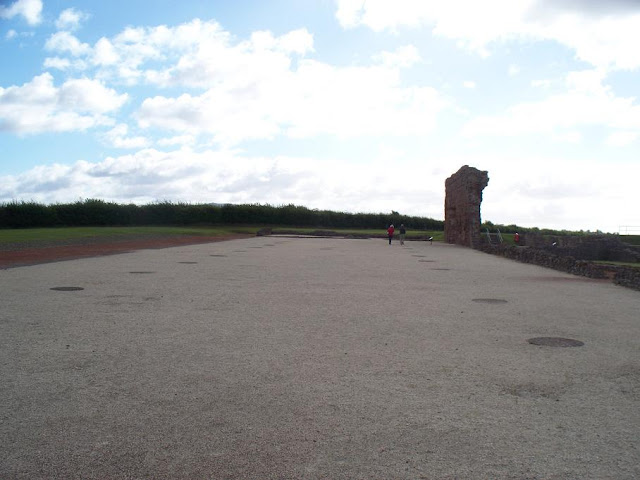 The fort at Wroxeter was soon abandoned, as the Legion moved on up to Chester (Deva Victrix), but the vicus that had grown up nearby simply expanded to take in the fort buildings, and over time the civitas (basically 'city') grew to be the fourth largest settlement in Roman Britain (and, as the new guidebook states, slightly larger than the town of Pompeii). At its heyday in the 2nd century AD, it is estimated that between 5000 and 10000 people were living in over 250 separate structures within the city limits. 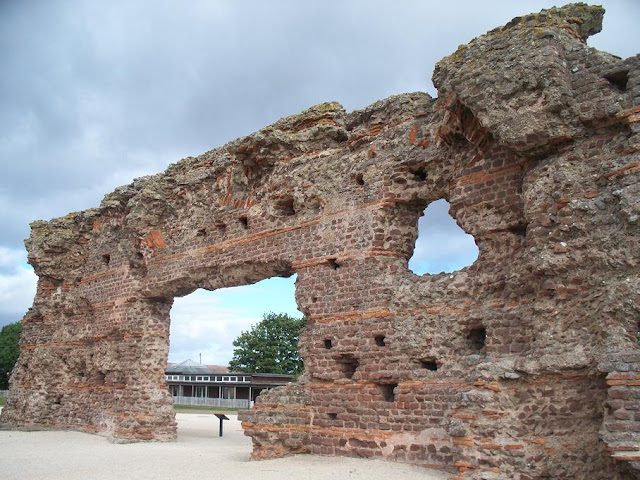 ^ known during the eighteenth century as "the old work", this surviving piece of wall is one of the tallest surviving Roman walls in Britain. Its survival is possible due to being incorporated into later buildings. 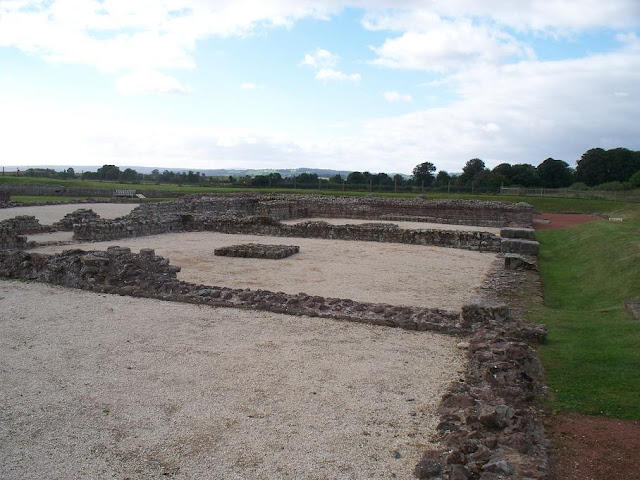 ^ a row of shops on the western side of the site. Shopping was an important part of bath culture - a trip to the baths for the Romans was akin to a trip to a cinema today, more than anything else.

Following the civil service shake-up under Diocletian, the province of Britannia was divided into four, with Wroxeter falling within Britannia Prima, whose capital was at modern Cirencester. Perhaps as a result of this, a shift is seen in links between the two from the third century, particularly in the similarity of mosaics produced here. 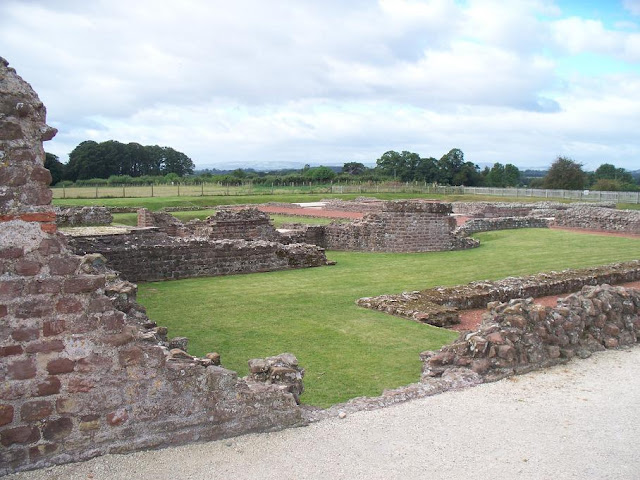 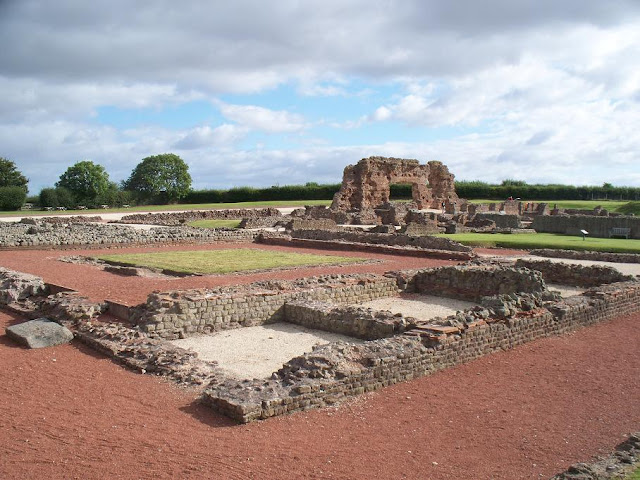 ^ the market hall in the foreground, looking north-east towards the basilica.

The collapse of the Roman Empire in the fifth century is most often followed, in Roman Britain, with a mass-exodus of folks from the towns back into the countryside, but not at Wroxeter. There is evidence to suggest, when the skilled folks who were needed to maintain buildings such as the baths had left, the buildings were patched up as best as could be done, or else relocated. A chapel was created within the bathhouse complex, and by the end of the fifth century burials were taking place around it. This is a strong piece of evidence to suggest that, while people remained living within the city, they were no longer 'Romanized' as burials within the city walls were strictly forbidden by Roman law (which was commonly misinterpreted for years as the Romans being afraid of zombie-like appearances, but is now accepted to be the wish to avoid contamination of the city water supplies). 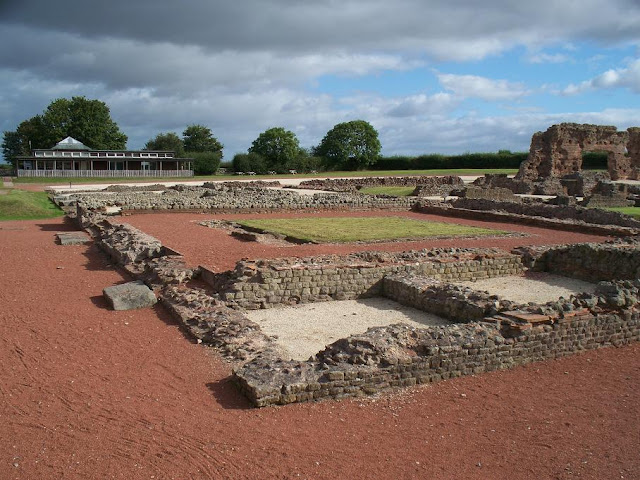 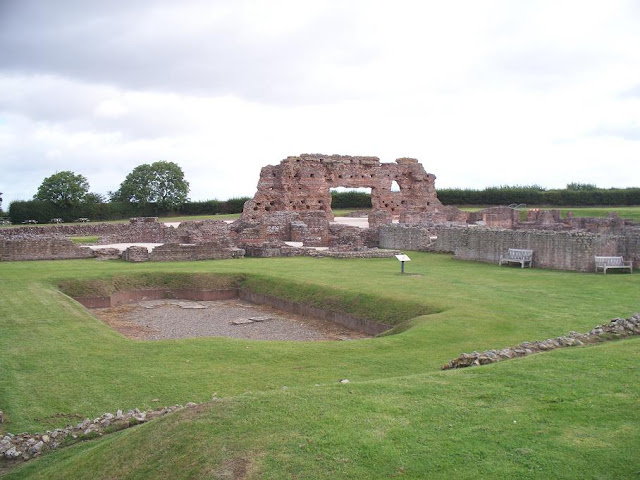 So let's talk baths. As I'm sure everyone is aware, the Romans loved their baths. It was one of the first orders of business for the army when they settled. It is generally accepted that the Romans didn't understand the link between uncleanliness and illness at the microbal level we do today, but they were great observers (the physician Galen being a big promoter of this), and knew from observation that a settlement created next to a bog or stagnant pool of water would result in ill-health for its inhabitants, but a settlement near running water was a safer bet. The running water would also provide for them both their drinking water and their bath water. They were fantastic engineers, and their aqueducts that survive in southern Europe are spectacular feats for an ancient society. As technical knowledge improved, therefore, they didn't need to site their settlement so close to this water, as they could channel what they needed directly to their chosen spot. Wroxeter is sited up the bank from the River Severn, as the river could be prone to flooding. 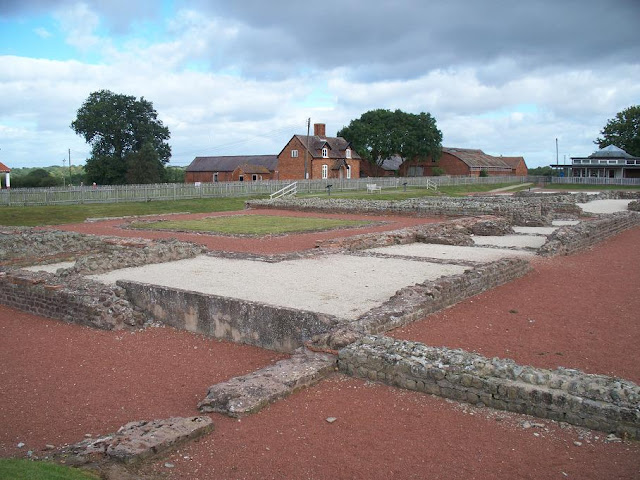 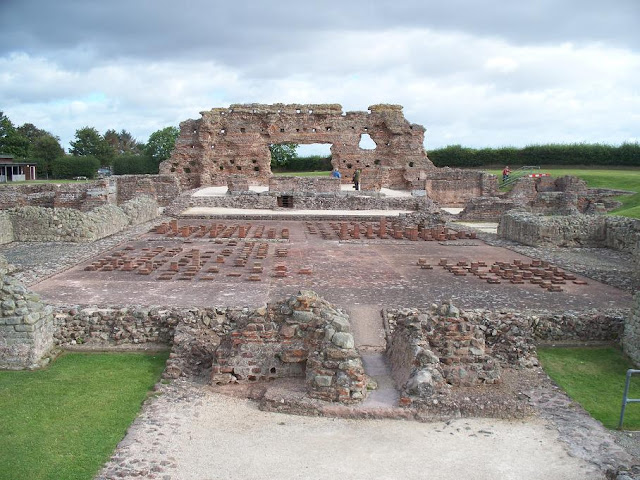 ^ the furnace (foreground) with the caldarium (behind) and tepidarium (middle ground).

Roman baths were a suite of rooms much like a Turkish bath, the rooms designed around different levels of heat. You would enter through the portico into the basilica, which could double as an exercise yard if required, then change in the changing rooms (by 'change', I mean 'get naked', because that's basically what happened). Naked, you'd then be rubbed down with oil and have your body shaved hairless, as this was the fashion and was considered to be cleaner. Seneca makes a wonderfully vivid description of bathers being plucked rather than shaved, from the time when he lived near a bath house in Rome. You'd then proceed through a series of hotter and hotter rooms, from the unheated frigidarium, to the warm tepidarium, to the hot and steamy caldarium. There was also the option of a scaldingly hot dry sudatorium, if you felt the need. From here, you'd finish off with a refreshing dip in the cold plunge pool (natatio) to close the pores. Ah, wonderful! 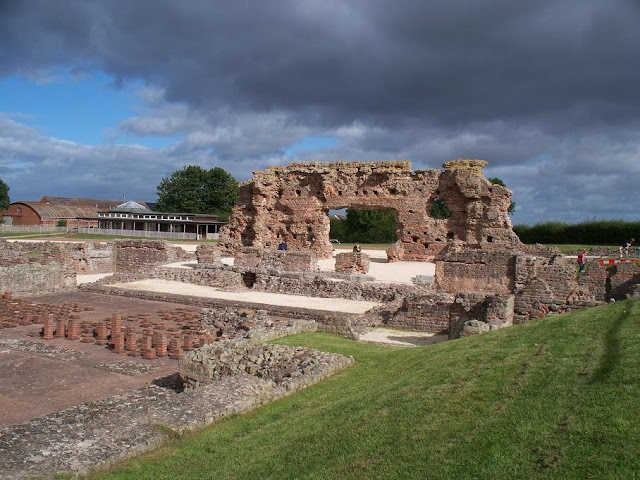 The hypocaust was, of course, key to all this. The floor was built on a platform supported on tile columns as seen on the left of the picture above. A fire was lit in a furnace room (as shown in the previous picture) then this room was closed off - the resultant heat would then move through the columns and heat the space; hot air rises, so it would filter through the floor and into the room above. The caldarium, being nearest to the furnace room, was of course the hottest of the sequence. The walls here also had a channel in them for the air to move through, resulting in heat from below and the sides. Ingenious! 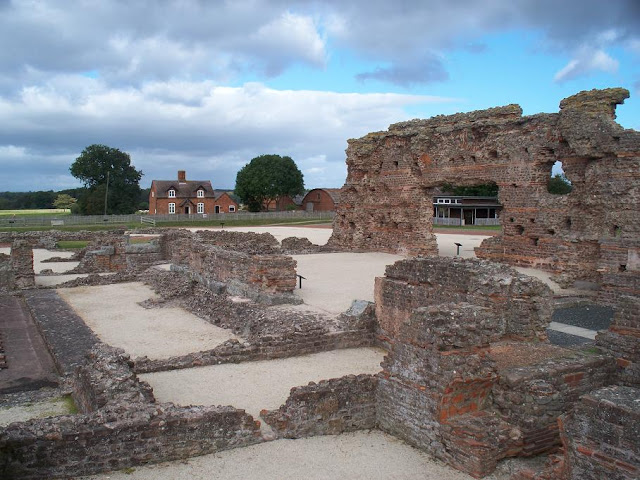 ^ the 'annointing room', that strip of white on the left. The white expanse between it and the Old Work is the frigidarium. To the right of this picture is the sudatorium.

Bathing was, as I briefly mentioned before, a very important social process. People had private baths attached to their houses if the house was of a decent size, but you would still come to the city baths to socialize, because so much business was transacted there. People would play games, make dinner dates, make political alliances, gossip (the Romans loved to gossip), and recite poetry. It was just part of the culture. Bathing was regulated by time of day - the poor people would be in before 7am, then women were allowed to bathe before 3pm, then once the baths had gotten to their most efficient, the men would bathe. Contrary to the popular belief of the Romans as harbingers of debauched excess, city life was actually very restrained, and particularly under the Emperor Augustus, there was quite a strict morality enforced on society. Men and women still socialized on a more-or-less equal level - women were present at Roman dinners, for example, unlike at Greek symposia - but society remained dominantly a patriarchy. 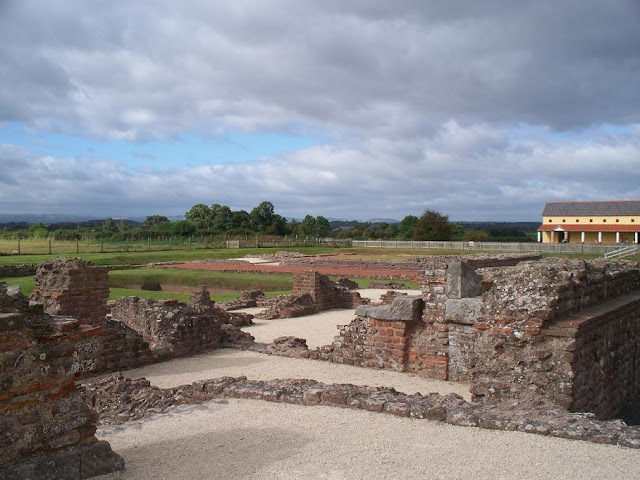 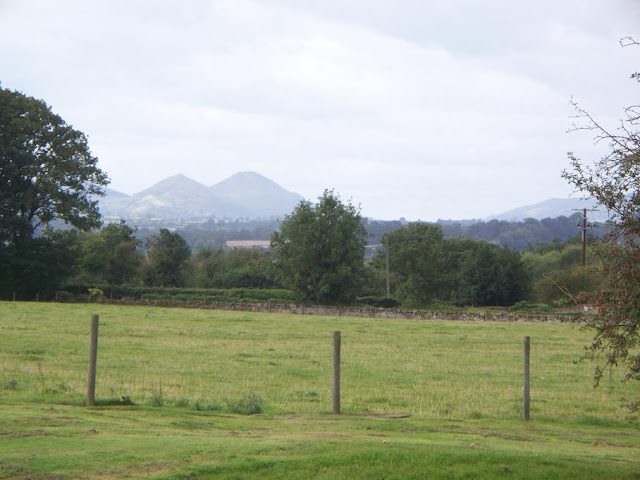 ^ Caer Caradoc Hill, as seen from the south-west from Wroxeter. It is supposedly from here that the folk hero Caractacus made his last stand against the Romans. 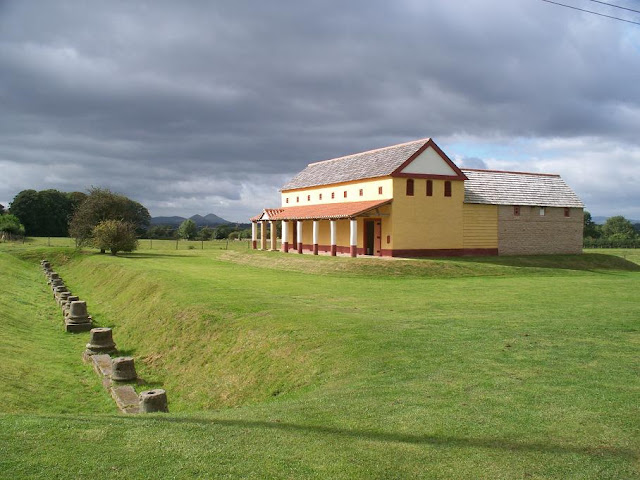 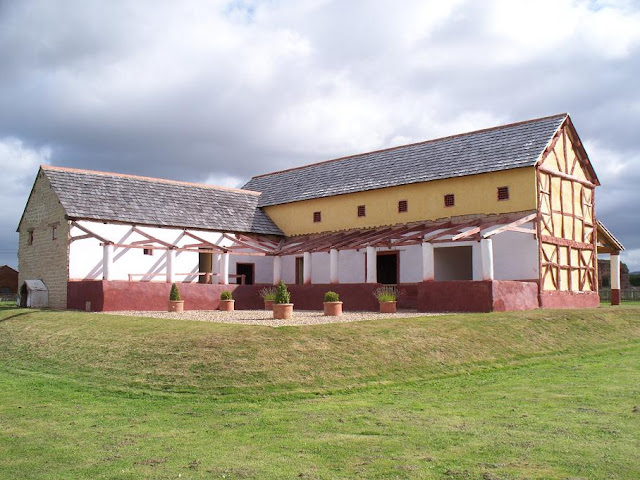 In 2010, a Roman town house was recreated for the TV show "Rome wasn't built in a day", using locally sourced materials and original methods. The design is based on a town house excavated at Wroxeter in the early 20th century, and built on top of the site of the city's forum (hence the raised platform, to preserve the archaeology below). The pillar-bases seen in the first photograph are actually the colonnade of the forum that faced onto Watling Street. 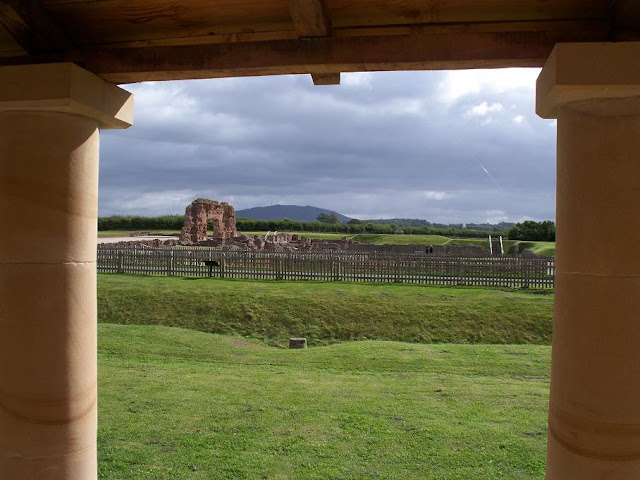 ^ the fence in the centre denotes the course of Watling Street, the main road between London and Holyhead. 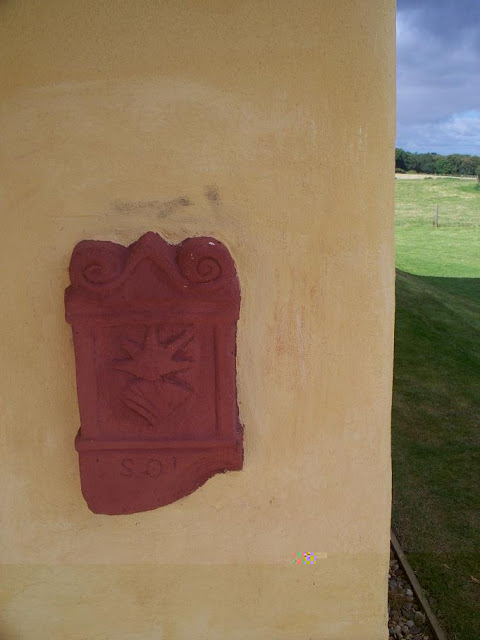 ^ a reproduction of a shrine to the sun-god Sol Invictus, the official sun-god of the Empire in the pre-Christian era. 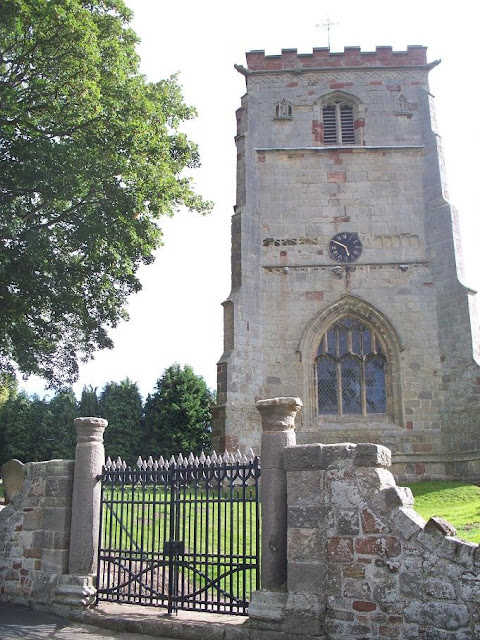 Nearby is the church of St Andrew, an Anglo-Saxon foundation that incorporates many features taken from the Roman city following its collapse in the sixth century, including these columns (above), and the font (below), which is carved in the base of another Roman column. The church may be part of a monastery that was founded before the city was abandoned at an indeterminate time between the late fifth and early sixth centuries. The settlement of modern Wroxeter certainly moved further south from the Roman city as time progressed, so that by the time of the Norman Conquest and Domesday Book, when the fitzAlans held the land here and had a manor house built in the field opposite the church. 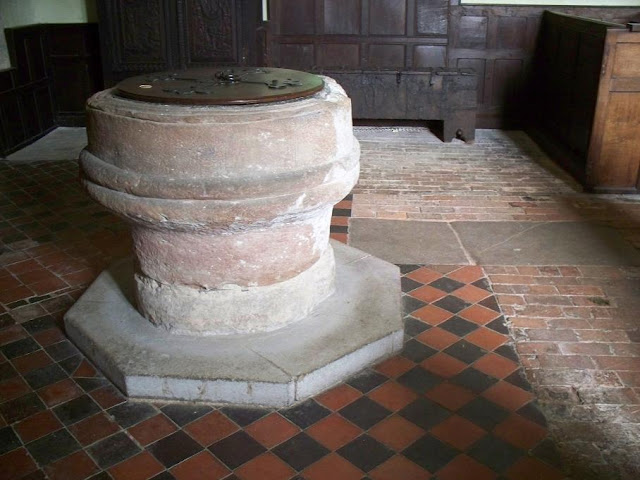 The ruins were uncovered during the eighteenth century, with Thomas Telford being involved in uncovering at least one town house. He seems to have done a lot of that, though, in the process of building roads and such. Being the county architect for Shropshire will, I suppose, have its advantages though. Anyway, as The Grand Tour became fashionable with young aristocrats touring Europe to see the ancient sites, interest in Britain's own ancient sites grew. The Romantic movement later in the century brought with it a heavy vogue for ruins of all descriptions, and Wroxeter's allure grew further. Extensive excavations were carried out in the 1910s (even during World War I), though it wasn't until the 1920s when the forum was excavated that the town was recognized as being Viriconium. Local landowners destroyed much of archaeological interest before the Ministry of Works could step in after World War II to consolidate the remains, but while the extent of the city continues to be studied by geophysics and other non-invasive means, we only have the baths complex open for visiting. But it's well worth it!
Posted by Unknown at 21:10