The inspiration for this post is, in part, down to the discovery in my attic of some photos from my dad's collection, and in part because I'm poised to begin an Open University module on "themes in the history of Wales", which is a fascinating topic, as I hope to tempt you all with today!

The subject of Welsh national identity is one that is quite fervently debated, and one which has been for hundreds of years. Welsh independence has been a dream pursued by many people, since before the Conquest of Wales by Edward I in the late thirteenth century. Throughout the twentieth century in particular, this dream, and this subject, sparked violent clashes - often physically violent - between Welsh nationalists and our English neighbours. Something happened in the 1950s that brought this to a painful head, which is something I'm going to try to look through today.

This looks beautiful, no? The typical scene from the Welsh countryside in the summer. This is Llyn Celyn in the Tryweryn Valley, in the middle of North Wales, part of what I like to call "the Welsh Lake District". Nearby are Llyn Tegid and Llyn Brenig, as well as many smaller lakes, and not far away is Llyn Trawsfynydd. Despite being on a fairly major road, the lakeside is quite peaceful, even in summer, with the odd biker group going by but that's often it. Let me show you another version of this same scene:

Slightly different, and not only because it was taken in the autumn. This is what's under Llyn Celyn, and in times of drought it can become something of an attraction, as evidenced by the folks walking across the bridge here. For an even more different view, try this. What you're seeing here is Capel Celyn, a typical rural Welsh hamlet until the early 1960s, when it was flooded to create the lake. But why?

Well, this is where everything gets controversial.

In 1956, a private member bill was put before parliament, seeking to create a water reservoir in the Tryweryn Valley. This bill was brought for Liverpool City Council, and doing things this way allowed them to bypass the usual circus of applying for planning permission to the relevant landowning authorities in the area. The creation involved disrupting railway lines, and road links, and - crucially - the flooding of the village of Capel Celyn. As one of the last bastions of Welsh-only speaking settlements in Wales, feelings were instantly aroused to fever pitch as the notion of the English drowning out the Welsh, the symbolism of the creation of the reservoir being extremely potent.

See, Welsh nationalism had been developing since the turn of the century, with Plaid Cymru being formed as the national party of Wales in 1925, after increasing dissatisfaction with the Labour party as not listening to the needs of the people of Wales. Support for the party grew steadily until the 1950s, when the charismatic Gwynfor Evans was elected president of the party. Under his leadership, Plaid Cymru began to be seen as a serious political force in Wales, and he was eventually to be returned as the first Plaid Cymru MP, in 1966. Upon his death in 2005, many of his political colleagues paid tribute to the lengths to which he had gone in the promotion of the Welsh language and Welsh nationalism at large. Back to the private member bill.

35 of the 36 Welsh MPs in Parliament voted against the bill, with the 36th abstaining. However, the bill was passed into law, leading to years of protest and uphill struggle by the people of Capel Celyn to save their homes. A Welsh militant faction developed, Mudiad Amddiffyn Cymru (Movement for the Defence of Wales), analogous to Sinn Fein I suppose, undertaking bombing activity first in 1963 when a transponder on the dam here was blown up. It was all for nothing, however, and the people were forced to leave in 1965. The buildings were demolished, the residents were offered the option of having relatives exhumed from the cemetery before it was covered in cement, and then the water was allowed to rise.

The valley flooded, Llyn Celyn opened in October 1965, with Plaid Cymru organising a political demonstration of opposition. Flooding a Welsh valley to provide an English city with water was seen as a major turning point in the history of Plaid Cymru - as mentioned, the party won its first seat in Parliament a year later, and public outcry in favour of Welsh national opinion over this issue led to the creation of the Welsh Office, and a Secretary of State for Wales, creations that still exist today (both, admittedly, to some serious controversy, largely based on English politicians filling the role). I do not feel, however, that the events of the 1957 vote demonstrate Westminster's disinterest in the voices of the people of Wales. Yes, the majority of Welsh MPs voted against the creation of the reservoir, and yes, despite this the bill was passed, but I think this is more to do with the fact that, in Parliament at this time, there was a maximum number of 630 MPs. The fact that 35 MPs voted against a bill would have next to no effect on that bill's passage whatsoever. It is important to note that information on how the other MPs in the House at this time voted is so difficult to come by as to be non-existent.

It is still seen as a hugely negative episode in cross-border relations, by some people it is akin to Edward I's subjugation of the Welsh as mentioned already. While hardly the same as building a castle from which to rule the native population, the creation of the reservoir had the same effect as building those castles almost seven hundred years earlier: it displaced the native population by force. The residents of Capel Celyn were allowed to leave with their lives, of course, but I feel the point remains.

Is this behaviour to be condoned, however? Is this right? The reservoir appears to largely be superfluous to the demands of Liverpool, whose watery needs are met by two other reservoirs (one of which is Lake Vyrnwy, also in Wales), and it has been since reported that the city doesn't use all of the water it gets from Llyn Celyn, after all. There is a deep resentment over this issue, many people calling it "a racist act" because of the perceived victimization of a Welsh-speaking village. I would have to refute this, as I find it highly unlikely that anyone involved in this decision looked at a map of Wales to single out a Welsh-speaking village to drown. I find it far more likely that Capel Celyn was chosen for geographic, and not demographic, reasons. What I do not refute, however, is the lamentable fate of the village.

There is no doubt about it, this is a very sad episode in Welsh history. It is also a very important episode in Welsh history, particularly in the development of Welsh Nationalism. It is sad to see, however, that what started as genuine political complaint with Westminster, and what I suppose can be called non-personal violence to reinforce these complaints, has degenerated into all-out conflict and a blanket hatred of the English by the Welsh.

^ Llyn Celyn is also the site of the most famous piece of graffiti in Wales.

So what does it mean to be Welsh? To me, today, it feels like you need to be an insular Anglophobe. This is so emphatically not what it should be, to me, however. As time has gone on, I feel that nobody knows what it truly means to be Welsh anymore. Even the ability to speak Welsh doesn't actually seem to be part of this identity anymore. "Cofiwch Dryweryn" aside, the graffiti daubed on the walls on this September day in 1989 is in English, after all. Something of a disturbing paradox there, I feel. 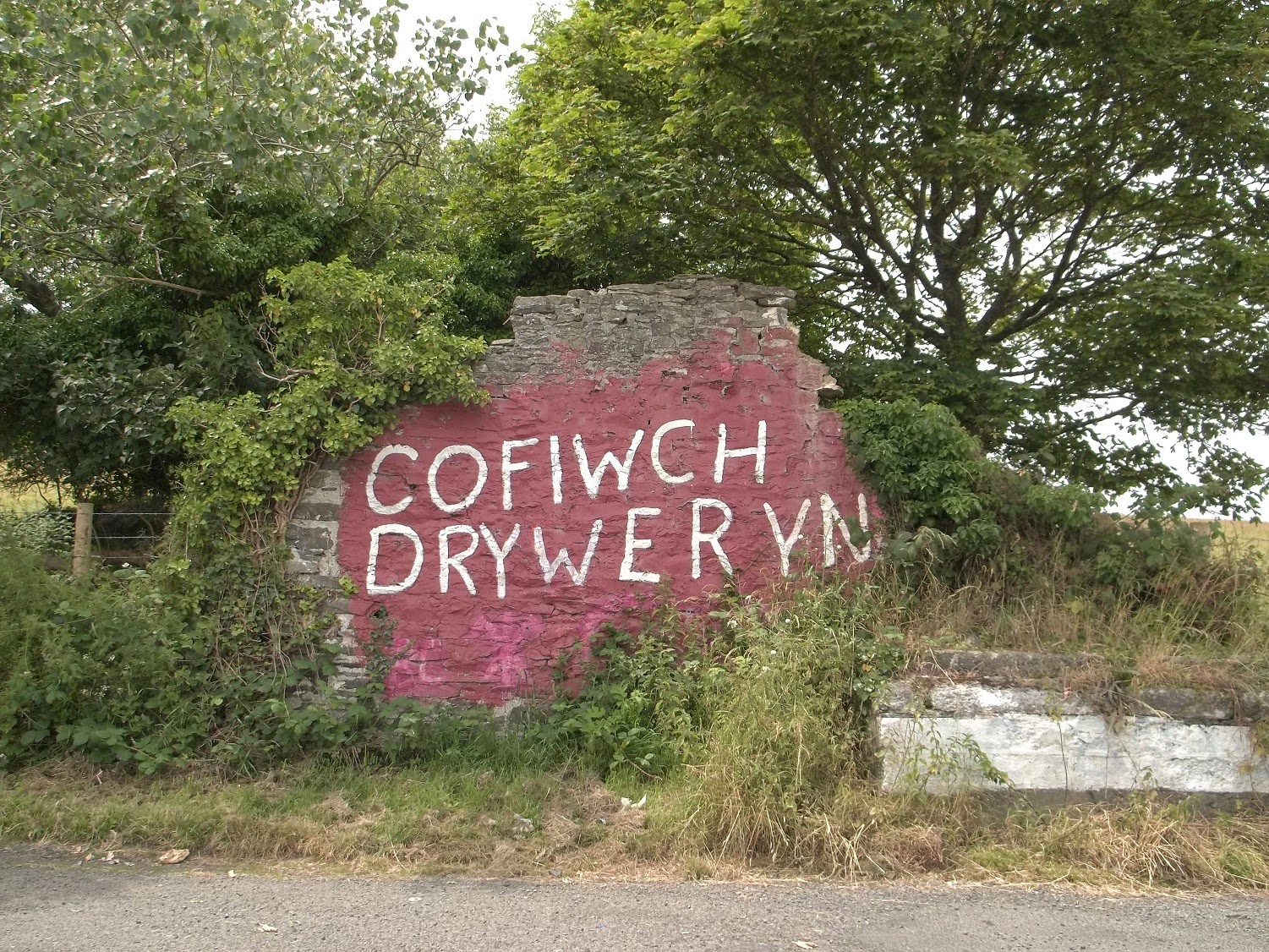